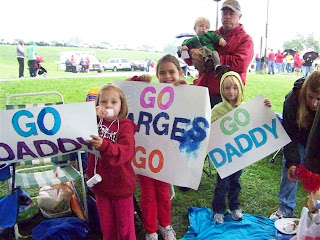 Jer and I did a team race yesterday at Peace Valley Park below my Dad's house. It was the 8th race put on to commerate a young man that lost his life in the twin towers. It is put on by his family every year to raise money for his foundation which helps children w/ MS. As usual for me, IT WAS RAINING! The race involves a .75 mile run, 1.5 mile canoe, 14 mile bike and 3.3 mile run. My brother asked me to do it with him this spring and I couldn't say no! He trained his butt off all summer and we had some great practice sessions. He has become an incredible biker. The plan was for me to pull us for the entire bike and try to get a big lead for the run. 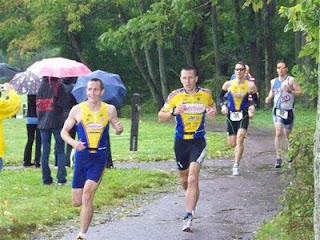 We were the third team out into the water..... 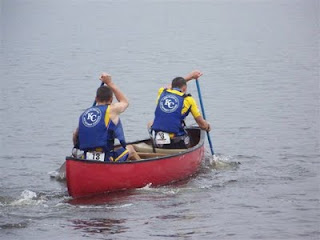 Race going per plan, look at that canoe form!! 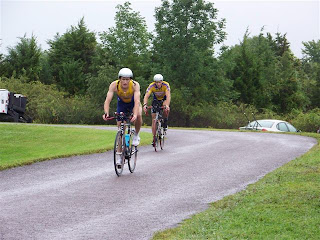 After a couple of lead changes, we came into T2 in first! 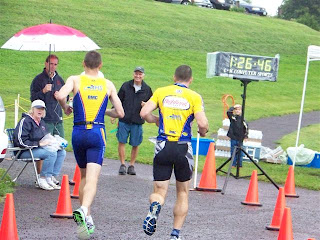 But we couldn't hold off the other team, ended up second overall. Not too shabby considering 120 teams signed up and it was another rainy race! Jer had a blast and has vowed that his running will get better! It was so much fun to have the family there on our home turf.
On Sunday, Autumn had her first soccer game. There are four under 6 girls teams. She did great, and scored the first goal of the season! Our team (and coach) is awesome and it's so fun to watch. Joshua has a good time to, he loves to kick the ball. 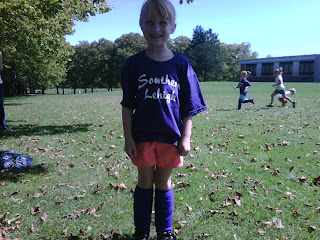