Blame for what you might ask? My first race as a race director is scheduled for this weekend. The Superbowl 10K which sold out in just over three weeks (550 runners) and is set for 10:30 AM on Sunday at the Lehigh Parkway in Allentown. All of the details have been discussed and ironed out, the volunteers are all set and everyone is getting excited for the race, BUT there is a Nor'easter that may hit us on Saturday. I know that's a few days away and I HOPE that the current forecasts are wrong! We'll see.

Training has been going well. It is tough to keep motivated with these DARK, COLD mornings, doing speedwork through the direction of my Garmin on roads in an empty, unbuilt development. Time is clicking by and I'm seeing some gains in my running, so that's at least encouraging....and it's starting to be light when I finish....bonus!

A couple more weeks until my first race, the Frostbite 5 miler....then we're off to Tampa to pace the marathon. Yay, three days in (hopefully) warm sunny Florida.

Been missing not being able to ride, but have got some trainer sessions in. Thinking about swimming again, but haven't swam since Bassman Half last fall! Rev3 Half isn't until early June so I have some time (I keep telling myself that). I have been at the pool though, Autumn and Joshua are taking classes at Swim in Zone, so I've been in the water with Joshua. They both LOVE it, hopefully they become better swimmers than I am!!

Went for my first mountain bike ride last weekend. Went up to Lehigh to ride on trails which I've been running on. What a blast! Brought me back to some of the MX days. The trails are tough and technical and each of us took a spill at one point. I took a good crash on a frozen downhill with leaves, came around a corner and lost the front end and went down on my shoulder. I decided I didn't need the front wheel any more, so I've modified my mountain bike so I can use it for some half ironman events. Not quite as aero as my tri bike, the gearing isn't as good, but I can hold plenty of nutritional suppliments. See the picture below :<) 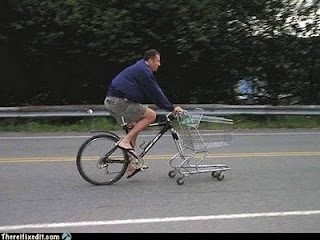 A good friend of mine has started a great foundation to raise money for local families that are dealing with cancer. He's already done some great things and has plans to really make an impact in the community. He set up a great "fund racing" program and he's also coaching some athletes as part of the program. I've set a goal to raise $500 this year and be involved with presenting the gift to the recipient. You can read all about his foundation at www.hcmfoundation.org and see my fund racing page at.. http://www.active.com/donate/hcmfund/garges
Posted by Chris