Yesterday was the first multisport race of the year that I've gotten some time to prep for...post Boston. It was held in Long Branch, NJ right along the ocean. This is the first time I had done the race and I was planning to meet my brother there in the morning for our 7:30 start. I headed out at 4:30am to make the 2 hour drive which was rather uneventful, getting to the race site at about 6:20 or so. It was a cool overcast morning with a shore breeze and temps in the mid 50's. Got my bike racked and took a warm up run with my brother to check out the first few turns of the bike course.

The race was 2mi run, 9.5mi bike, 3mi run. I knew it was going to be a wide open race being that the distances were so short...and that we'd be running longer than we were on the bike. The bike course was tough...flat but it had A LOT of turns. I tried to rehearse it in my head before the race so I could be as efficient as possible on the course. The race was paying a decent amount of money and there were some pretty fast guys looking for their share. I didn't realize recognize anyone but I could tell. Being that it wasn't a long race and a cool day I put a small water bottle w/ grape EFS on the bike but wasn't sure if I'd need it....and I didn't.

As I'm leaving the restroom before the race, a guy see's my green Trakkers kit and strikes a conversation, telling me he had been at Rev3 Knoxville last week, how great it was, how great Rev3 and Trakkers team is for the sport of triathlon, etc. Pretty cool to be at a local race and hear the impact that Rev3 and Trakkers has had in their relatively short existence!

So we toe the line and there are some fast dudes. As we take off, there's some serious jockeying for position going on before we hit the first turn around. As we get to the turn around, a few guys turn left on the bike course (sign of things to come?) until they realize they were going the wrong way and turn back. This put me up front....waiting for them to pass me. First guy to go by is none other than the dude from the bathroom! He's motoring. One other guy comes by me and we stay in a decent pack, 1-2-3 for the duration of the run. First mile was 5:05...oh no, still an hour of racing to go! Run 1 - 2 mi, 10:26 (man those Saucony Fasttwitch 3's are FAST). Come into T-1 a few seconds behind the first two guys and out onto the bike....

Now here's the test, I hadn't ridden much if at all during Boston training, but put 300 miles on the bike in the last two weeks, would it pay off? I was never a strong biker, but have made some good gains. First half mile of the bike I start to pull the first two in and I'm within a few bike lengths of them. All of the sudden, the first right turn comes up and they go right past the signs and go straight! Since we were the first 3 guys coming, the volunteers weren't ready yet and once they realized that the two guys in front of me made the wrong turn they started yelling. So now I just ran my rear off for the first 2 miles and I'm in front of this race again....like the hunted waiting for them to catch me again. As I said above, the course had a bunch of turns but was pretty well marked with signs, volunteers and police, so I was pretty confident I was going the right way. At about 6 miles in we made a horse shoe on a road around a small lake....I looked back and there was NO ONE! Did I make the wrong turn? Was I having that good of a bike? As we headed up back to transition area, about 3 miles to go it was a long straight road with a significant cross wind. Just kept me head down and kept charging. Into T-2 I go....great dismount... Garmin read 9.8 mi, just shy of 25 minutes, 23.5mph

Head out of T-2 and legs didn't feel too bad. First run turn around I see two guys in front of me...WTF?? Turns out the two guys that were in front of me on the bike cut 2 miles out of the bike course and were 5 minutes ahead of me!! Now I was fired up. I couldn't let it get to me because the guys behind me were about a minute back. I put my head down and clipped off two 5:35's up to the last turn around on the run. Up to about 1:30 between me and the next guy, so I had some breathing room. Crossed the finish line at 52:40, run 2 - 3mi, 16:37. Splits aren't up yet to see how they compare.

Once we cross the finish line I told the race director what had happened, figuring the first two would be disqualified I would end up with a win!! The best part about a win...the $500 first place cash prize!!<) The two guys in front of me crossed the line at about 5 min and 4 min in front of me, but I didn't see them at all after the race. Went back to transition, loaded up, did some bench racing with my brother who had an awesome race....17th overall out of 275 finishers....only a year after he started running and cycling!

Got changed and headed back to the awards ceremony. As they announce the awards, they call me out in 3rd place....WFT?? Talk to the race director....guy that finished 2nd told the RD that I took the wrong course...I went too long?? I told the RD what mileage my Garmin and my bike computer had, he said that was exactly what he measured....disqualified 1st and 2nd and handed me $500 cash!! That is the largest prize purse I've won and it made the 2 hour drive worth the effort for sure. Now I can also say that Trakkers green is the color of money!! 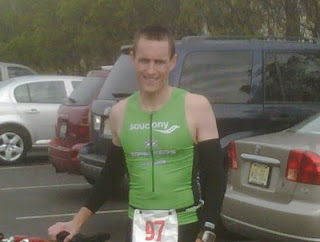 I had spent the night at my Dad's house with Joshua because Lauren and Autumn were headed to the American Doll store in New York city for the day. When I got home from the race Joshua was super excited. He had a great morning with Pops and Grandmom. Pops had him operating the backhoe and driving the dump truck!! Joshua didn't want to leave, although he was so exhausted he could barely stand up. It was awesome of them to watch him for the morning and now he can't wait for the next sleep over! 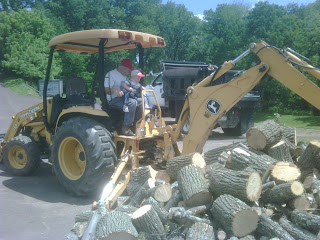 So I'm a couple of weeks away from the Half at Rev3 Quassy. I may do a sprint tri this weekend that's only a half hour away so I get some experience in the water before the half. Rev3 will only be my 6th tri, so it may be smart to get in the water before Quassy.
Posted by Chris