No, not the Heinz variety either... It's been a while since I've posted so I'll update all the happenings. I had some more pictures of VT, but somehow they are lost in emails in cyberspace? I'll post them later.

Biggest news was our trip to the Green Mountain State. Our annual journey to Vermont had us staying for 8 days at the family Camp in Barnard, VT on beautiful Silver Lake. Not a lot usually happens at Camp and that's why we love it. We were greeted to a hot week with warm lake temperatures and lots of swimming. The kids loved it, the dogs loved it and Lauren and I loved it. Heck we even got to sit down and read some magazines!! 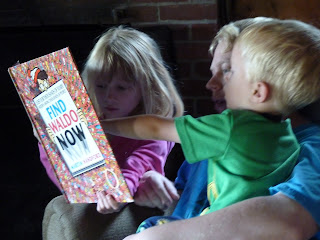 On the 4th of July the whole family (Lauren, her sister, her dad, her cousin and his wife) all ran the 34th annualy Langhan's run...a 7.2 mi race starting at the Woodstock town green, through the covered bridge and up and over Mt Tom. It was hot and challenging. I ran 42:46 for 5th overall and Lauren ended up 2nd female by less than 15 seconds! A fun time. 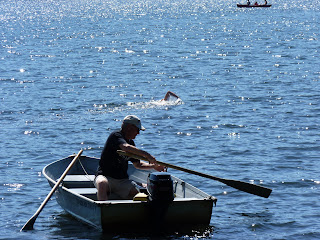 I got a few rides in, some swims and runs. Above Lauren's dad is supporting me on a swim across the lake. On Friday I met up with the group ride (Team Stupid) from the bike shop (Start House Ski and Bike) for a nice ride on some previously uncharted roads. A nice way to meet some new people. They named it the Team Stupid ride because the ride EVERY FRIDAY ALL YEAR....imagine riding in central Vermont in January...enough said. 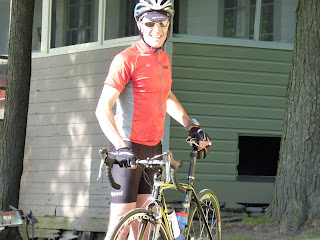 We got home to a crazy week. Our church had their Vacation Bible School. Lauren and I volunteer on a rotating basis depending on who worked late and/or had meet
ings, but every night it was 9pm until we got home. That being said, there wasn't much communication with the outside world or much done around the house. It was a great program and the kids loved it.

Last weekend I did the Sunset Challenge. It's about 2 hours away in New Jersey, but it's well worth the drive. The water did not meet USAT standards so it was turned into a duathlon. I did the Olympic Distance which was 2.7mi run, 25.5 mi ride, 10K run. I had a great race, into T1 about 10 seconds ahead of 2nd place and out onto the bike in a hurry. Covered the 25.5 miles in a course record 1:04:15 for 23.8mph average which was great for me as well. I came into T2 with a 5 minute lead, there was NO ONE out on the bike course, and I woke most of the police officers up as I came through the intersections! The heat and humidity was brutal for the 2nd run, a two lap course. The race director was prepared with 5 water stops per lap which was nice. Ran 37:xx for the 10k and ended up winning by 7 minutes and finishing under 2 hours which was cool. My brother did the sprint du and had the 6th fastest bike split finishing 11th overall, taking 10 minutes off of his time from last year which was his first multisport race. 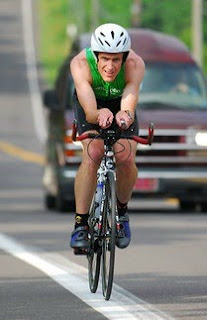 Last week was the first event in a training triathlon series which was started by our local club. It was very much needed in the Lehigh Valley and I felt it was well attended for a first time event. It will only grow from here and it's awesome to see what Endurance Multisport is doing in the Lehigh Valley.
Lauren was invited to lead a pace group at the Nike Women's Marathon in San Fran on October 17, 2010 which is awesome. She's going to have a blast for sure.

Hope the summer is treating everyone well. I'll post some more VT pictures in the next few days...some awesome sunset shots!

Also looking forward to trying out the new Saucony compression socks which may be on my doorstep today. I hope to do a shoe review of the Tangent 4's that I've been racing in, they're awesome.