Well, other than the first day of school for Autumn the Garges family has had a week we'd rather forget. To start off with the good, on Tuesday Autumn started FIRST GRADE! She's in a Spanish Immersion program this year in which her class spends their entire day being spoken to in Spanish (with the exception of her electives like Art, Music, etc). Lauren and I were anxious to see how she would react, if she'd be tired, excited, frustrated, etc. She seems to really like it and it's been fun teasing my brain to remember some words. It's a great opportunity that our school provides and I'm glad the she's able to take advantage of it. 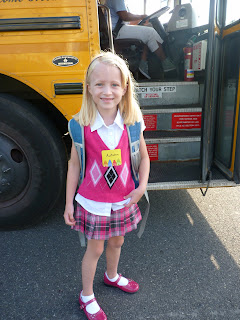 On Wednesday night we took Joshua over to Carolyn's house. He's up in Vermont with them for nearly 10 days. The house is quite quiet without him and we miss him, but it's fun to get calls from him and here how he's doing.

On Thursday night I came home from soccer practice with Autumn to find Lauren doubled over on the couch in pain. She had severe abdominal pain and tried to suck it up until whatever it was passed. By 10:30 she was still in serious pain so we came up with a plan to get her to the ER. Luckily our neighbor's father is so gracious and came over to stay here while Autumn slept so I could take Lauren to the ER. They got her in right away and checked all of her vitals and found nothing, but she was still in significant pain. I stayed until about 12:30 while they checked her out. Needless to say I didn't sleep well as I was anxious to here what was going on but had to stay home to get Autumn on the bus. Lauren called at about 5am and said they were admitting her and that the CT scan, Xray and ultrasound had all come back negative and they were going to do an MRI. I spent the day at the hospital with her and she was OUT OF IT. They had pumped some serious pain meds in her. We met with doctors all day and no one found anything...the results of the MRI were negative. While we were releaved that there was nothing major wrong, we still wondered what had caused it. Some of the docs had some theories, but nothing concrete. Friday PM they put her on solid food and by 7am on Saturday she had texted me that she wanted to come home. So they discharged her Saturday am and she has not had pain since. It is nice to have her home, Autumn kept saying how quiet the house was without her or Joshua. Hopefully that pain never returns and it was just a weird incident.
Yesterday was the first cross race of the season. A field of over 500 riders had preregistered and it was a great day. The event took place at the Valley Preferred Cycling Center (formerly the Lehigh Valley Velodrome). I had preregistered but with Lauren's trip the hospital I figured I wouldn't be racing. I picked her up on Saturday AM after they discharged her and it looked like I could make the start so I went for it. I brought Autumn along so Lauren could enjoy some quiet peace at home.
Showing up at 9:20 for a 10:00 race and a field of over 80 riders is definitely one thing that most people would recommend against, but I was just feeling lucky and glad to be on my bike after the hectic days we had just experienced. I raced the "B Masters" field which was Cat 2/3/4 35+ 45+. I showed up to the line with a horrible starting place, no warm up and no clue where the course went which are also something I would typically recommend against.
The gun went off and it was just craziness. I didn't know where we were going and people were fighting over 40th position and bikes were flying all over the place. The course was not set up for my style, there wasn't much technical stuff and there were a lot of power sections. The tree areas had some bad shade / dust conditions. I managed to stay up the first lap and learned the general course layout and some lines. From there on in I was passing people. It was fun, I learned some great lines and forgot about the pain (somewhat). It was odd for me, I was making most of my passes in the long power sections. I ended up working my way up to 14th which I was happy with given the circumstances. Certainly not my best race, but I'll take it. Average HR was 170 for 40 minutes (92% of max)!
Navigating some of the off camber turns... 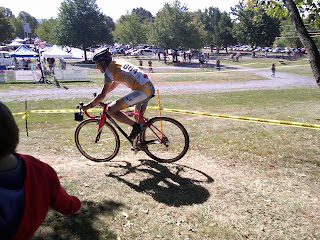 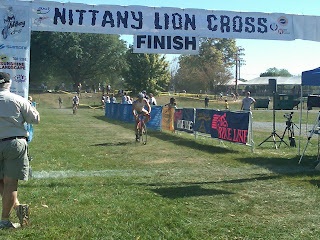 Always a smile after a cross race..... 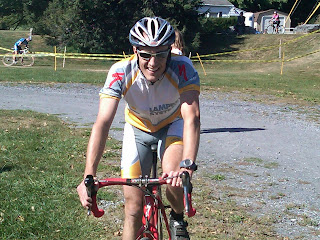 Autumn had fun playing with her friends there, but something was off. She immediately fell asleep on the way home, then she and Lauren took a long nap together in the afternoon. She had a fever of 102, poor thing. Everyone in the house seemed to be a little off...I was feeling the effects of limited sleep as well.
So today was supposed to be day 2 of the cyclocross weekend. We woke up to the sound of some much needed rain. My immediate thought was to skip the race, but after some coaxing from my friends I packed my things and made the 15 minute drive to the race. The rain had stopped and the course was actually getting pretty nice! Much smaller fields today, maybe 25 guys in my race? I had a decent start until someone got bogged down in a very wet mud section. I made a few passes and came by my friend telling me I was 7th. I didn't want the leaders to get away so I made a push and passed two guys in the off camber beside the finish line then I pushed the finish straight away and passed 3 more guys. I now found myself in 3rd and we were having a great battle.
I was feeling fast and battled in 3rd/4th for another lap or two until I hit some type of wall. Mental? Physical? the fate of the week catching up? I don't know what happended but I pulled out of the race. My first DNF since a hamstring injury in Boston 2005. I'm a fighter, I NEVER give up..but for some reason at that moment it felt like what my body was telling me to do. It felt right. As I watch the rest of the race I was madder than a hornet, I was frustrated in myself and I was confused as to what was going on. I've been fighting some overtraining issues for the past month, was that the cause? Do I have cycling burnout? Do I need to get back to my roots and run some more? Will this cause the "reset" I need?
Today was also my first soccer game as a coach. Despite the early rain, we still had our games. I think things went very well and everyone had fun which is ALL that matters in U8 girls soccer. I know I had fun, it's so great to see the kids excitement and watch them learn and progress. Poor Autumn wasn't feeling well and had to "pull a daddy"... she sat on the sidelines with mommy for the last half. Just another feather in the cap that was our week.
So we've all agreed to just write this weekend off, pretend it didn't happen and start fresh tomorrow.
Hope everyone had a great weekend themselves. I also hope you took some time to reflect on the September 11th anniversary. Where were you when you first found out? Remember to give thanks to all who lost their lives that day and in the days since protecting our country.
Posted by Chris