Well, not a ton of stuff going on right now...but with registration for Boston opening on Monday and Lauren out in Sunny San Fran pacing the Nike Woman's Marathon...pacing came to mind.

What does pacing have to do with Boston? Well, apparently before my running "career" even started there was a 100th running of Boston (14 years ago). In an effort to get more people to qualify for Boston, Amby Burfoot had an idea....he could "pace" people to qualifying times. Pace groups are such commonplace these days that we just kind of expect them to be there, but that wasn't always the case. 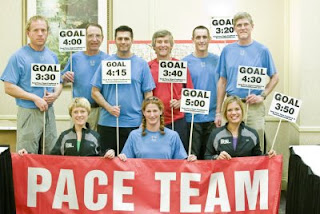 I've been involved with pacing since 2007 when I was asked to pace the St. Lukes Half Marathon in Allentown, PA. I didn't think much of it at the time, but it sounded like something that would be fun and hey, it meant free entry into the race...cool! Well it turned out to be so much more than just a free entry. At the race expo we had a seminar so would be pace group participants could meet their pacers, learn more about their pacers, ask any questions they may have and hopefully calm their race day nerves. It was a great idea! Race day came around and as we gathered I had the feeling there was something more to this. I wasn't just running a race, going for a PR or out there to look good...NO, there were nearly 50 people COUNTING ON ME to get them to their goal. GULP, now I was the nervous one! Well as you meet the people in your group, the miles click by and it turns out to be the most fun, rewarding running experience you can imagine. Pacing turns a largely individual sport into a team effort in which EVERYONE is helping EVERYONE succeed. There's nothing more rewarding than crossing that line with a pace group member that met or exceeded their goal...or that comes up and gives you a big sweaty hug because they BQ'd. If you've never been involved with a pace group (as a leader, supporter or particpant) I urge you to check one out.

I have officially paced and led pace groups in two marathons and five half marathons. I've paced my wife to a marathon PR and she's paced her sister through a great half marathon. Annually, I organize the pace group teams and pace the St. Lukes Half Marathon and I'm lined up to pace the Gasparilla (Tampa, FL) 15K and Half marathon. And every single one of those races weren't run for me, they were run for the team and it truly is a unique, rewarding and exciting experience.

So, wish Lauren luck on Sunday morning. She'll be out there with the rest of the http://www.marathonpacing.com/ crew pacing the 3:45 group which I'm sure will be large because it's a Boston Qualifying time. And when I sign up for Boston on Monday morning, I'll be thinking of all of the people that are registering alongside me that have qualified because of pace groups.

As for me and the kiddos, busy weekend planned. Staying over at Mom Mom's house tonight and Jer and I are racing the Granogue cyclocross. Then some wood stacking, lawn mowing and hopefully pumpkin picking. Another trip down to Mom Mom's (thanks Mom) so I can race day 2 of Granogue...then home for the Halloween Parade!! Have a great weekend everyone.
Posted by Chris