What a great fall weekend. Lauren flew out to San Fran on Friday and had a great day pacing the marathon today (Sunday). Her goal was 3:45 and she finished 3:44:46, not too shabby!

The kids miss mommy, but with the help of mom mom, we kept them busy! Mom mom was nice enough to watch them Saturday and Sunday AM so I could race a double header cyclocross weekend at the DuPont farm in Delaware....talk about a picturesque setting!


Back to the weekend. Saturday was a little windy, but mild for mid October. We spent the day outside (me working in the yard, them playing) then packed up and headed back down to my mom's. Got the kids to bed, watched some Phils and hit the sack for day two. The kids were excited for the morning because they were headed to my brothers in their PJ's to have some gourmet PANCAKES! Then when I got back we headed home and hit the Coopersburg parade. They got lots of candy and fresh air. They both missed mommy tonight, but they're sleeping like a log now. That's my secret, when mommy's away keep them busy....they're so tired at night and it's much easier to get them to bed! 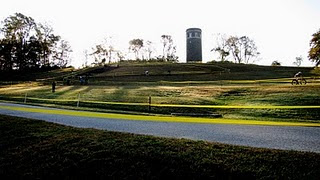 Onto my racing....Saturday we woke up to temps in the mid 50's and some strong 20+ mph winds. We made the 75 minute trip down to find an awesome course greeting us. Some tough run up sections, winding downhills and a few tecnical areas. I felt it was much more of a power course than I liked, but it still was a great course. My field was sold out at over 100 entries and I was lucky enough to get a second row call up on the LONG asphalt start. Gun went off and I just got smoked down the road...probably sitting in mid 20's. One of the first sections was a sand section and it was chaos! This guy tried to ride it, I decided to run...you can see me on the inside.

I decided to run it just about every lap.....and it worked pretty well. I should have been riding it later in the race when a line formed, I got passed once on the remount.

It seems as I've been making a habit lately of starting off slow then picking people off. Spotting people time in a race is not a smart thing to do. I made a charge up to 8th and I could see 5,6,& 7 ahead of me but I felt fried. I had a rough 3rd lap and let two or three people by me. I came by Jer and heard him say one lap to go....I had no idea the race had gone by that fast. Time to kick it into gear!

I had a great last lap, made some passes and got to the LONG asphalt finish stretch. I gave it all I had, shifted into the big ring and took off. Managed to finish 8th (there's a guy I passed right behind me). I also realized that I should be using the big ring more on that course.

I was happy with 8th considering the size of the field, but I wasn't happy with how I rode. A rough patch in the middle, a couple of dumb lines. The day started off kind of crappy with a painful crash about half way through my first sight lap, so I was glad to turn that around somewhat. The wind wasn't as big of a factor as I though, but it was evident out there for sure.

Day 2 was predicted to be a beautiful weather day. I woke up to temps in the high 30's but no wind. After seeing how dry the course was yesterday I left my mud wheelset at home. Probably could have used it! They transformed the course into a totally different layout. MUCH more technical and a little sketchy because the dew / frost overnight had made the grass slippery and the dirt areas VERY greasy. The off cambers were tough. Overall though it was a slightly slower, more technical course that would reward those with good line choices and some power in their legs.
I had another good call up in another sold out field. One of the front row guys didn't show in time so I got sent to the front row which was nice. I decided to start in the big ring and it paid off big time. I was a little intimidated starting up there, but hoped I belonged! The gun went off and I had a great clip and and a great jump. I managed to come through the first few turns in 3rd! You really had to be on your toes because the slick mud could bite you at any time. I nailed my tire pressure and things were going good UNTIL I found myself on the ground...just like that. I was up quick but a couple of guys got by. I made another pass or two and found myself comfortably in 4th with 3 laps to go. The mud was tricky, on the run ups it would pack into your shoes and I had a hard time clipping in. I focused on my lines and rode a solid (and tiring) 3 laps to hold on for a podium in 4th! I was real pleased with that race.

After the race I realized that my 2nd lap crash had busted one side off of my egg beater pedal, I had done the entire race with a three sided pedal...no wonder I couldn't clip in!

So now I should have some pretty good points in the MAC series so I plan to hit two of the last 4 rounds, see if I can finish this series off close to the top 5 in points.
Posted by Chris