Joshua's 4th birthday is quickly approaching! We celebrated a little early with family over the weekend. Joshua had a great time and LOVED all of his new presents...all the cool "boy stuff" like a work bench, a matchbox track, John Deere tractors and Lego's. He's been playing with them every waking moment since Saturday! Here's the happy Birthday Boy blowing out his candles (while holding a lego toy). 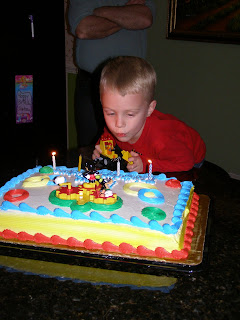 Thanks to everyone that came to celebrate with us. His birthday is this coming Monday, I was hoping to take him to see a dirt stock car race this weekend, but the weather may not be cooperating. He and Autumn are excited to go so I hope we can go. Speaking of Autumn, she came home yesterday with her eighth "blue ticket" from school. Blue tickets are positive rewards for children "caught" doing something above and beyond and displaying proper behaviour without being asked. They only had a small number of them out per day so it is an honor to get one. She was so proud, but she's making us poor and Chik Fil-A rich! We told her that as a reward we'll take her out to her choice of dinner every time she gets a blue ticket...little did we know!

On another note, my training has been going well. I am finding it difficult to get the bike training in that I should be for the upcoming Tour of the Battenkill.....between work, swim lessons for the kids, weather, loss of AM daylight and Lauren working late and attending weekend conferences, there's not much time to add heavy training this time of year. I'm sure I'll survive, but as of now my focus is more on running and having a good Boston Marathon.

I did get to race my first race of the year. I wanted to get an idea of where my fitness is after having to take six weeks off earlier this year. It was a local 5k with about 600 runners. I had a big block of 3 days of training the three days before which included a 11mi run w/ 8mi tempo at sub 6:20, a 20mi TT on my road bike in windy weather (59 minutes), a 20 mile run and a 52 mile ride. I knew this wouldn't be a PR by any means, but it would be a good indicator of how my unrecovered legs would hold up.

It was a windy 35 degrees or so at the start. I ran the course to warm up and get some extra miles. I went with shorts, short sleeve shirt, gloves and light beanie. The gun went off and everyone really took off (or I'm just not used to racing 5K's). I started off in 10th-12th place or so. As some of the young guys faded I worked my way to 7th or so. The first section had the wind to your back but I knew I wanted to be in a pack going into the wind. I made two passes into 5th but couldn't bridge the gap to 2,3 & 4 runners (1st place was gone). I soldiered through the wind into mile 1 at about 5:12 or so. Not too bad I though.

The next mile was flat to slightly downhill. I gained a few seconds on the pack ahead, but I didn't want to push too hard and kill myself for the mostly uphill into the wind 3rd mile. Mile 2 was 5:22. I started to catch #4 as #2 and #3 started to pull ahead. I thought I may be able to get him, but his young legs had too much for me on the track. Crossed the line in fifth, 16:47. I was happy considering how much training I've been doing lately. My foot held up well and I hit the course again for a 3 mi cool down.

Overall it was great to be back in the racing scene and gave me some motivation. I also know where I stand for this weekend's Caesar Rodney 1/2 marathon. I'm excited now that the season has started and it seems that my running is coming back.