Well, I'm sorry, it's been a while. Patriots Day in New England has come and gone (and so has Easter for that matter) and the 2011 Boston Marathon is in the books. We had a lot going on Boston weekend including my brother's first time as race director (directing a 5K) and two birthday parties. That meant that I would drive up to Boston on Sunday AM and meet up w/ the group. Had an issue on the drive up due to heavy rains the night before (maybe I would actually use a GPS in the car?), but made good time and I was treated to an incredible day. I parked at the T-line and boarded the train with all the Bosox fans. The expo was a madhouse, so I grabbed my bib, a couple of samples and hit the food court for lunch.

Sunday night we had a huge group at Bertucci's. It's great to catch up with everyone and see the race day jitters flowing freely! Sunday AM our bus would take us out to a friend's house in Hopkinton. We were treated to beautiful sunny skies and a chilly tailwind. As we lined up in the corral the sun was winning the battle and it was getting warm.

My race plan was to go out at +/- 6:30 and see how it went. With the stress fracture / loss of training and having raced Battenkill last weekend, I had no idea what I was capable of. I looked through my logs and I had just over 450 run miles logged from Jan. 1 through April 18. Last year I was over 900! My nutrition plan was to sip on my flask of EFS Liquid Shot (400 cal and plenty of electrolytes) and if I needed something solid I had some Honeystinger energy blocks.

The start of Boston is incredible. So many people lining the streets, fast steep downhills and runners going in every direction. It's easy to get sucked out too fast if you don't pay attention. I had a couple of 6:1x miles early on but I wasn't too worried, I had done the same last year. By the time we finished the first 5K it was getting hot. I was down to singlet and shorts and I was drinking at every water stop. The pace didn't feel too bad but I could tell it could get ugly at any point. We had a consistent 15 mi / hr tailwind which was nice, but also dangerous. Dangerous because instead of being cooled by front or cross winds, you were running in your own body heat. I was holding 6:30-ish pretty consistently and trying to take everything in. I love to watch other people, takes my mind off me. There were ALOT of people running by and I would try to pick people out and log them in my mind so I could score a mental victory as I passed them in the later miles. 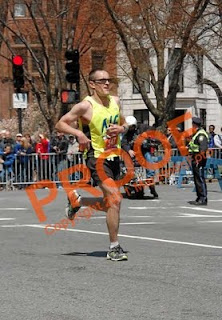 I didn't look too bad early on 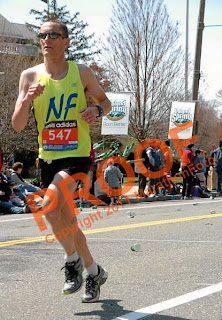 As we entered Wellselley and neared the half way point I could now tell it was going to be a tough day. I was hydrating well and following my nutrition plan, but it was warmer than my body had been trained for and I was starting to feel the lack of training miles. My legs were starting to feel like it was mile 20 and it was only 13! I typically feel like the half way point of Boston is mile 21 after you crest Heartbreak Hill. Uggghh Oooo. 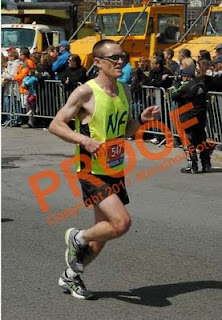 I prepared myself for a mental and physical struggle. The entire race to this point I just tried to keep moving at the same pace and hadn't thought at all about finish time. I came through the half at 1:24:34 which on a good day would set me up well to go under 2:50. My goal now was not to stop and walk at all costs. Mile 16 was quickly approaching which meant the dreaded RT128 overpass. By the time I hit the overpass I had finished off my Liquid Shot and figured I had (hopefully) a little more than an hour left. At mile 18 I would see our group, so that gave me some motivation for 2 miles.

It was great to see them and get a boost of energy as I made the right hand turn at the Newton Fire Station. "Game on" I thought to myself and surprisingly I climbed the hills very well, passing a lot of people. The odd part was I enjoyed the uphills more than the downhills, because by this point my legs were like tree trunks and the downhills hurt like hell!

As I began to climb Heartbreak I could see the crazy Boston College kids screaming and yelling and I would finally see the BC banner at the top. I had made it over the hills, and still holding a decent pace. I've said many times before though, the last 5 miles of this race is the hardest. It just seems to go on forever and I just kept telling myself "keep the legs moving". It also helped that although being passed here or there, I was passing people who were having days much worse than mine. All I could imagine in my mind was crossing that line...and that's what kept me going. 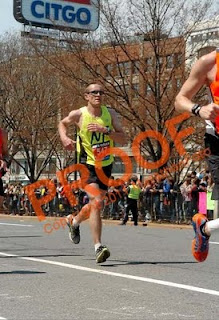 The damn CITGO sign
There it was, the Citgo Sign. That meant I was getting there. Mile 25, Coplay Square. If I could keep going and get to that point I KNEW I could survive one more mile. As I crossed the sign I finally did a time check. Sub 2:50 had slipped away, but a 2:51 finish wasn't out of the question.. 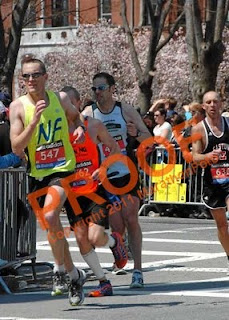 The last right hand turn on the course....headed to Boyleston 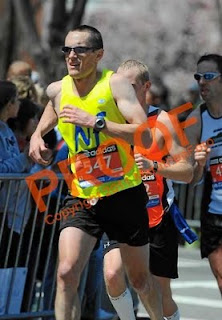 This photo is painful just to look at! 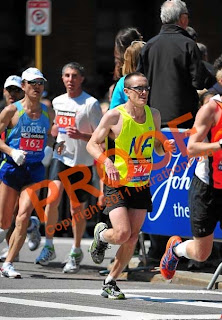 Made it to Boyleston...but I don't look happy to be there! 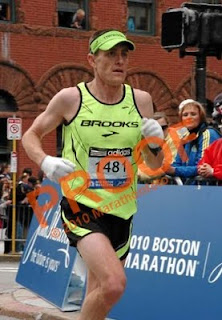 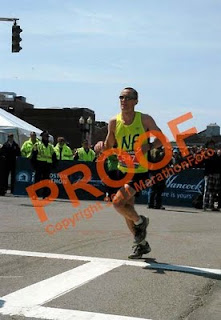 My first view of the 2011 finish line...
The last 3/8 of a mile is something you cannot describe. Boyleston is so wide and lined 5-10 deep with people cheering and making noise. Your leg hurts, your mind hurts but all you can do is focus...focus on that finish line! I gave it my all and I was actually passing people. As the clock came into sight I realized that after I subtracted my 13sec start gap I would come in sub 2:52! 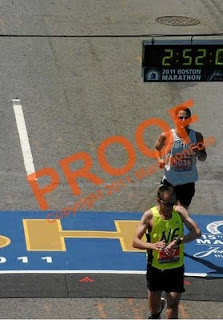 I crossed the line in 2:51:48. I had "only" lost about 2:30 over the last half. Man did that hurt! I was happy with the outcome but I will train more next year! Once I crossed the line I grabbed my medal and headed for a massage. Bring on 2012!

On another note, as I mentioned above my brother put on his first 5K to raise money for his daughters' school. The weather was tough, a cold low 40's day with a brisk wind. He had over 100 registrants and all in all it turned out very well. Lauren (who really doesn't like 5K's) ran her first race of the year and had a great time.... 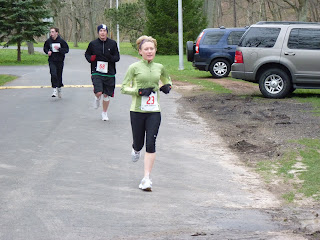 The kids run was well attended as well. Autumn and Joshua had a blast (although I had to carry Joshua so he could keep up)! 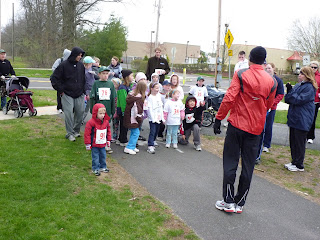 Looks as though Spring is finally arriving. The grass is getting green, the flowers are coming out and the trees are flowering! 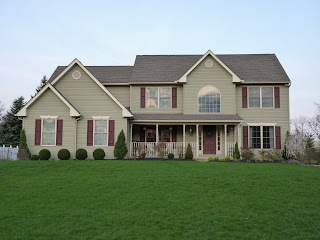