On Sunday I made my annual Fathers Day trek to Wilkes Barre for the 8th annual Wilkes Barre Duathlon. As I've said before this is a great race with a small hometown feel and a great hot buffet breakfast at the end. Also typically very competitive because there's a cash prize. It was my fourth time racing it so I was familiar with the course and layout.

I headed up solo this year, it's an early start (7:30am) so no family to cheer me on. My brother is on vacation so he missed the event this year. Rolled out of the house at 5am and arrived at about 6:15 or so. Great parking spot right across from transition and I headed to pick up my number and get transition set up.

The racks were numbered so everyone knew where they should be. When I racked my bike I noticed that the racks were a little unsteady, I was on the end so I thought I could control it and didn't expect any issues. I laced up my Avi Stoltz's and headed out for a 2 mi warmup. Weather was decent, low 70's and a little humid. Leading up to the race my running has really been feeling strong, but my bike legs have been eluding me. This being a "sprint" distance race, I knew it meant one thing...PAIN! The shorter races mean high intensity right from the start. My goal was to try to run up front in the first run, have a quick transition and get out on the bike ASAP.

I looked around at the start and I saw Sean Robbins. He and I have battled EVERY year! In fact, he's come in second six times and third once in the 7 years the race has been held. I didn't see last year's winner though :-) The gun went off and a few of us made our way out front. 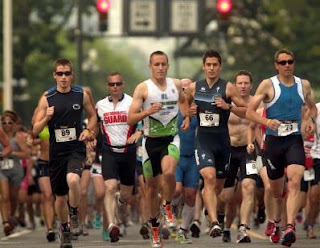 There was a relay guy that was dressed in a running outfit that was a strong runner who seemed to want to be out front. I tucked in behind him and as we hit the first sharp turn at the top of the causeway and I could see Sean dangling a few seconds back. As we hit the 2nd mile marker a guy in a tri kit came to the front but was content to not push the pace. I didn't recognize him and all I could do was hope he wasn't a strong cyclist! As we crested the bridge and headed into transition area I slowed slightly in an effort to lower my HR for the bike. I had no idea of pace, I had my watch on but I never look down in the short races, I go by feel. Came into T1 a couple of seconds back, 16:19 for 3mi.

I ran right past my bike, but quickly turned around...helmet on, sneakers off, bike shoes on and out onto the course. Perfect flying mount and I was gone...and no one but the police car in front. "Here goes nothing" I thought and put my head down. The first 4 miles are tough w/ a lot of stinging climbs....down to 12-13mph....which I knew and just kept pushing. It was clear that my cycling legs weren't 100% with me, but I wanted to give my best effort. I hit the turn around on the out and back at mile 8 or so and I could see where I stood. Sean was coming, we exchanged waves and I put my head down. The strong runner from the first run was losing time to us so it was clear that the race was between Sean and I. Sean had beat me the first year I raced here, then he waxed me pretty good at the Steelman Triathlon in 2009 so I knew he was strong on the bike and event stronger off the bike on the run.

As I came down the last straight into town on the bike I could tell I was holding decent speed and there was no one close. Feet out of my shoes, nice fast dismount and then it happened...as I was racking my bike the rack fell down!! Luckily I was the only one in the transition and I could lay my bike down. Did lose some time there and as I exited the transition in 42 sec and I could see Sean was close. In a strange twist of events, I actually had the fastest bike split of the day and none of the fastest run splits (2nd in both runs)!

After nearly an hour being redlined I had no idea what my legs had in them. The sun was bright and it was getting hot. I mentally broke the run down into small segments and hoped I could hold it together. As we hit about 1.5mi a volunteer yelled "he's about 20 yds behind".. "GREAT" I thought, he's catching me! As we passed mile 2 I could tell I was redlined, but told myself I only had less than six minutes of pain left! With about a half mile to go we climbed the causeway one more time and made a sharp turn.....he was close and looking strong. My plan......get over the incline up the bridge and then open up my stride down the bridge and through the last city block. And that's what I did, the best sprint I could muster...and I hit the line a scant 17 seconds ahead after pulling off my fastest mile of run 2, a 5:31! 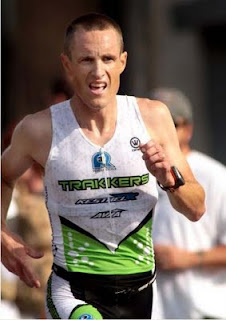 Sean crossed and we congratulated each other. And then I found out how cool a small race like that is when a couple of reporters came over to chat with me!! I caught up with a few friends and chatted with Sean for a while, then loaded up and hit the post race breakfast buffet. Did some searching today and found the front page of the sports section of one of the newspapers..... 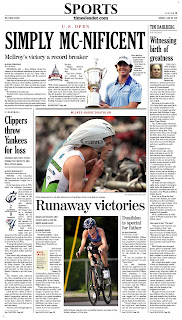 Made it home before noon and had a great Father's day visiting and hanging out w/ family. Hard to believe the longest day of the year (IE: Summer) is hear already. Autumn just finished first grade and we're gearing up for our annual trip to Vermont.......

Here's some cool comparison info...it always amazes me how consistent the human body is. This has been the same course with the exception of the bike in 2010.