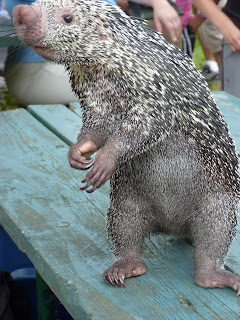 We had a great weekend last weekend. On Saturday we hit the final Lehigh Valley Road Runners Kids Run series event. The Lehigh Valley Zoo was set up with some animals. This porcupine was fun to watch! Joshua ran in the 3-4 year old division (1/8th mile) and Autumn ran in the 7-8 year old division (1/2 mile). The event was very well run and they both did awesome! They were slightly intimidated at first as there were 300 to 400 kids out there total, but they were sad at the end when we told them we'd have to wait until next year when the series starts again! 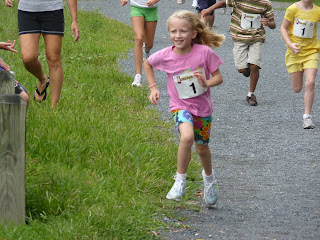 Autumn had a big smile as she made the turn for the finish line.... 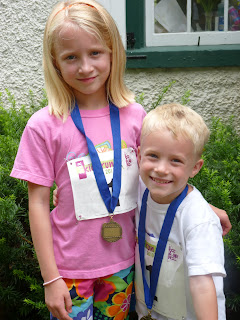 Two happy kiddos with their medals and ribbons! (Not to mention post race popcicles!) 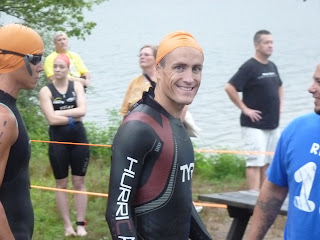 Sunday was what has become an annual tradition...the Steelman Triathlon. It was my first tri in 2007 (I did the spring) and this was my fourth time doing the OLY. The race is very large (1000 people total) and very well run. Lauren was going to do it this year as her first tri...but she's on the comeback trail right now and had to defer until next year. She did volunteer though, which meant a 4:30am arrival! We spent the night at my mom's house on Saturday night, she's only 10 minutes from the race site. We drove to the site in the pouring rain...uggg!

By 6:30 or so the rain had stopped, I got all my stuff set up in transition and geared up for the practice swim. The practice swim was important to me....why? Because I hadn't swam since my last tri in June....oooppps! Luckily it was wetsuit legal (at 77.5 degrees) and I pulled on my super fast TYR Category 5 suit. This thing kicks butt! By 7am we were off. I immediately realized that my goggles were sealed in my left eye. After three brief turns onto my back to adjust them, I was in business. The first 800 yards or so my sighting was awesome. Sighting was a tough thing though, no sun glare but not much light...PLUS our wave wore ORANGE swim caps...and what color were the markers? ORANGE! Just as I did last year, I got off course...well actually I followed the markers...but they were off course. I made the turn into the dock and headed to T1. 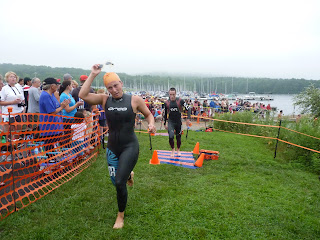 A quick T1 at 1:52 and I was off onto the bike. Man did I feel like crap! The choppy water had me taking on more water than normal and I was paying for it now. As we climbed the steep climb out of the marina my dreams were crushed even further as I was passed by a 55 year old guy on a road bike...OUCH! During my last tri I had some stomach pains that really slowed me down. My goal today was to just see what type of speed and power I could build into my legs. Since we were the first wave and the road was closed to traffic I got a good glimpse of how many people were in front of me. I would guess there were at least 25 people. The course is two laps on the closed road and the total elevation gain was about 1500'. As I approached the spot where the first turn around was supposed to be I realized that they had lengthened the course....likely due to wet roads. I was now steadily building speed but realized that the humidity was going to make this a tough day. I was really sweating and by the end of the first lap (half way) I had used up my bottle of EFS...and realized that the first lap was 13.5 miles! I typically don't even use one bottle in the bike leg of an OLY!

I decided that I would take a bottle in the drop zone...if I didn't I would be jeopardizing the race. As I started the second lap, the bike course filled up with sprint triathletes. I was steadily passing people and by now feeling much better. I grabbed the bottle and put my head down.

My dismount was spot on and after a blazing 28 second T2 I was off onto the run course. The run course is a very nice two loop (for the Olympic) course on a paved path. The sun was now coming out and the run was turning into a SAUNA! Once I got going I was steadily catching runners and picking off sprint and olympic participants... It was tough to tell where I stood in my age group and overall but as long as I was still passing people I was happy. There was plenty of water so I kept drinking and dumping water over my head...putting one foot in front of the other. I had no Garmin so I had no clue as to my pace. I felt like a turtle, legs were shot and all I could think of was the finish line. And finally it came.

I crossed the finish line in quite a daze, found a cold wet towel and sat in the shade...drinking cup after cup of fluid. After 15-20 minutes I was feeling better. I probably drank two or three times my normal amount and it was barely enough. I ended up 7th overall out of 380 finishers and first out of 43 in the 35-39 AG. Our club had a HUGE presence and claimed a bunch of podiums which was fun to see. I was happy with my effort, and combined bike/run was even better than expected. It was a great event, looking forward to next year! 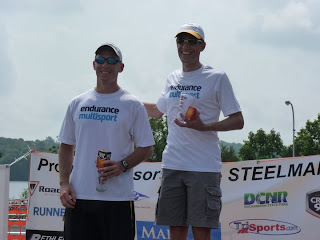 Not sure what's up next.... I'd love to do another Half Iron this fall. I have two half marathons coming up which I've been training pretty hard for and I'm pacing the Wineglass Marathon on 10/2! Throw that on top of planning for the 2nd annual Town Hall Cross, putting on a cross clinic and oh yeah, the cross season....and this fall will be busy!