The last few Thursdays have been a fun change. Two weeks ago I went out to the Thursday Night training series for some good high intensity training. It takes place on a closed one mile paved "fitness trail". Thirty laps, sprints for points every three laps. Good chance to see what I had and get some good Powertap data! The group in total was in the 40's or 50's. I had 4 or 5 friends in the field. It usually attracts some pretty fast pro's so my goal was more to hang on than aspiring to get any points.

We ended up finishing the 30 miles at nearly 26mph average! I hit a few peak power records and I averaged 222w for the entire ride. 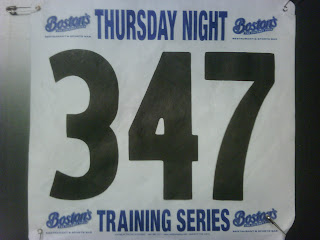 The next Thursday I put on a small cyclocross clinic / practice near my house. Six people showed up, three total newbies which was great! It was fun to put some laps in on the grass, hit some off camber turns and run some barriers. Hoping to get a Thursday night training series going in the next week or so, we need one. Cross is coming...only a couple of weeks until the first race.

We had a great mini vacation to the beach last weekend. Luckily for us we moved our typical trip up a week because of an early school start for Autumn this year. If not we'd be missing out totally due to the arrival of Hurricane Irene. Speaking of Irene, I was supposed to race a half marathon on Sunday which has wisely been cancelled!

Planning is rolling along for Town Hall Cross on 10/8. Cutters Bike Shop and Specialized have kicked in some great merchandise prizes.