Wow does time fly!  Last week Greg and I found ourselves in the normal race week crunch.  This was the 4th year of our "brainchild", Town Hall Cross.  We've had an incredible string of weather which was predicted to hold through race day, promising to produce the driest version of the race to date...and the fastest!  Our preregistration reach nearly 430 by Wednesday, besting last year's 383 by a landslide!  We again had some great stuff lined up.  Live band, announcer, race bags, cool t-shirts are already staples of our race.  This year Specialized and our bike shop, Cutters stepped up in a big way.  We had some great merchandise prizes and we had a frameset and a set of tubular tires to raffle off, PLUS the Specialized demo rig was on hand with road and cross bikes to test out!

Wednesday after registration closed we put in a long night of seeding riders and preparing bibs and waiver forms.
Friday was course set up day.  Our Lamprey teammates came out in force to help convert this spectacular park into a race venue.  Specialized donated a ton of course tape and some pro looking fencing.  By 2:00 we were all set up and ready for some pre-riding.  I was fun to hit the course with a group of friends and teammates, look at the lines and discuss tactics.  I think it benefited us all on race day.
A beautiful early morning greeted us on race day.  The start of the day is always hectic.  Finalizing the course, getting the officials squared away, getting registration opened and flowing, etc.  By the time I caught a breath it was time to go out and warm up quickly before my race.  My plan for the day was to race the Masters 35+ Cat 1/2/3/4 and then ride the Elite men's 60 minute race, just to enjoy the day and the course.  I got my tire pressure dialed in after many small drops it was feeling good, the course was FAST.  I missed my front row call up, but snagged a spot in the second row behind one of the race favorites, knowing that following him would help me get a good start.

The start is basically an uphill slog to the highest point of the course, then the "fun" begins...cool descents, sweeping turns, barriers, etc.  The gun went off, I got a good clip in and and followed Kevin up the start straight.  I was about 7th wheel heading into the first real turn.  I made one move and went up the St. Luke's staircase 6th wheel.
I made another move up the short steep kicker at the end of the climb and followed my teammate Greg into the trick 180 turn up top.  Greg faded wide and I snuck under him before the descent.  I was happy to be sitting 4th wheel with Joe, Josh and Kevin in front of me.  I was getting a little antsy now, knowing there were some fast guys behind us I wanted to surge and get a gap.  I held my composure and just sat in.  My goal before the race, top 10, but now I was sitting pretty good so I wanted to make hay while the sun was shining.  I could tell I had some good lines, but my weakness to some of the "heavy hitters" is the raw power sections.
All day I had been able to carry speed while holding tighter lines on the exits of the corners.  It helped me to pass Greg early, then it allowed me to sneak by Joe on the 2nd gravel crossing.  I was now up to 3rd wheel and still feeling pretty good.  Josh and Kevin were riding well just in front of me.  I was able to hold a tight line through the mud rut turn and get by Josh, now up to 2nd.

As we came up past the finish line Joe put a surge in and put himself between Kevin and I.  I sat in and checked the gap as we climbed the staircase.  I could tell we were pulling away and I knew we only had two laps left.  Lap times were just under the 8:00 mark so I thought to myself "hold on for 15 more minutes and you got this."  I was able to break the course down into smaller pieces and I had a lot of friends and family out there cheering which also helps.

Cyclocross is a lot about suffering and how much suffering you can push yourself to endure.  I was suffering out there.  Sweat dripping off my forehead, my legs screaming and my heart racing, but I was still smiling.  That's what's weird about cyclocross, no matter how much it hurts....it's FUN and it keeps you coming back.

When we hit the power section just past the pit with a lap and a half to go, Joe and Kevin surged.  I couldn't match their surge so from that point forward I just wanted to ride smooth and consistent.  I cross the line about 15 seconds behind Joe for third.  Definitely one of my best rides and my first time on the podium in a 1/2/3/4 race.  I was very satisfied and glad to step up on that podium....not to mention the $40 check! 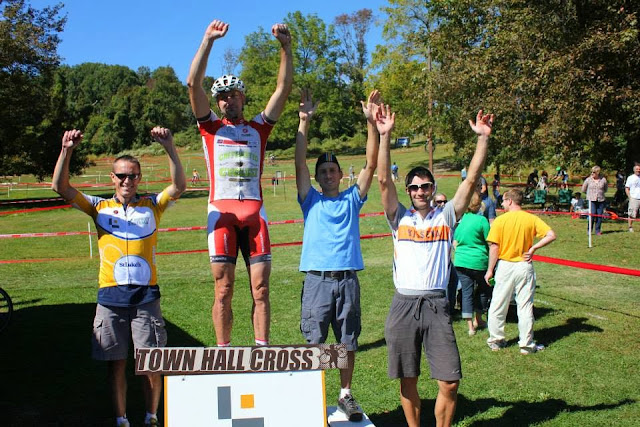 Once the race was over it was time to get the kids race going.  This is always my favorite part of the day.  The kids just love it and this year we set up their own course around the baseball field.  We got special medals made for them.  They were smiling ear to ear!
It turned out to be such a beautiful day.  The venue really lends itself to an event like this with great elevation, great views for the spectators and plenty of play areas for the kids! 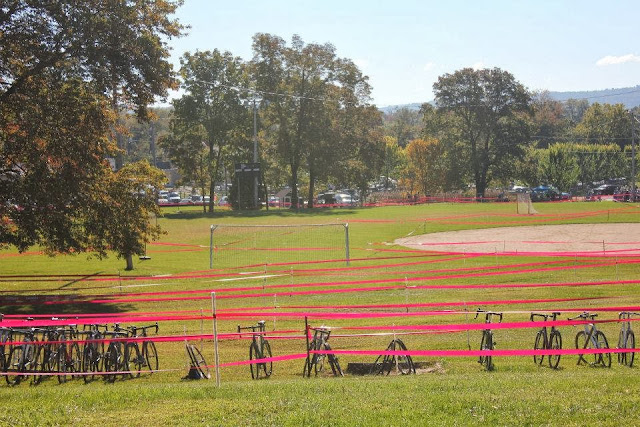 It was such a nice day in fact that I decided I wanted more of the course.  I signed up for the 1/2/3 race and decided to go out and ride around some more.  I started at the back and worked my way past 6 or 7 riders, but as the laps went by my legs started to rebel.  It was just too nice of a day too pull off though, so I soft pedaled around the course, hoping next year could be a fraction of what we were blessed with this year.  Ended up being a great race up front though, and two teammates found themselves in the top 6!

We had some great helpers for course tear down and our long day ended shortly after 6pm.  The race facility was morphed back into a park, the only sign of what had taken place that day was worn down grass.

We headed out to eat and celebrate.  Then back to Gregs for a good ole fashioned bonfire and tent camp out!  A perfect way to cap off a great weekend.  The little kids crashed in the tent while the big kids watched the GoPro video of the race before passing out themselves.  To top off the weekend, Lauren won her half marathon on Sunday morning!  Can we bottle up September to use throughout the rest of the year?