Quick report on Whirlybird CX, stop #5 of the MAC series held at Bensalem High School on Saturday.  We got slammed by a Nor'easter on Thursday and Friday so all indications were a sloppy day.  I had my pit bike set up for mud and all intentions of racing that setup.  I was surprised when I got to the venue, under overcast skies and windy conditions the course had dried up somewhat.  There was one mudpit and LOTS of power zapping spongy grass, but all in all the course was good.  I ended up using my race bike and new Specialized Tracer tubular tires at lower than normal pressure in an attempt to "stay on top" of the wet soil.

I felt decent in warm ups, there were some power sections that I just felt like someone had put glue on my tires, then there was the headwind which even shot the HR up higher.  Before the race I did a few practice starts on the pavement and had hoped to start on the slightly shorter inside line.  I had a 2nd row call up, but I was forced to line up to the far right...not ideal.  My goal, as it always is, get the best start I can and just hold on for dear life!  We get the "1 minute" warning, the "30 second" warning then within what felt like 5 seconds the whistle blew and caught a lot of guys off guard, including the guy to my left who reacted by losing his balance and falling to his right, right into me.  I got free of him and started dropping gears and sprinting.  A hole opened up on the outside and I took it, which allowed me to sweep the outside of the sweeping left hand turn and make a HUGE amount of ground up.  I came out of the prologue in 9th.  Whew, alright I thought, now to hang on!
Sometimes you get in a group off of the start and it feels "easy", sometimes you're struggling to just keep a wheel.  Today was the latter for me.  I was dangling on the back end of the bulk of the lead pack.  Someone fell in the mud pit, I decided to run and made a pass so I was now sitting in 8th with two guy behind me and then we were starting to get a gap.  I made the decision to push into the red and try to stay with the group and try to get a gap on the rest of the field.
We finished the 2nd lap only to see "4" to go.  Ouch, I thought there was no way in hell I was going to hang on.  By this point the two guys that were right behind me had passed me in the power / slog sections into the wind.  My legs just didn't have it, not sure if it was the hard efforts early or just not my day.  Two other guys who must have been caught up in bad starts or a tangle up had also made their way by.  Now sitting in 12 and doing what felt like damage control.  I just broke the race down into half laps and checked each half lap off.  With two to go the legs started to come back and I started to flow.  I had been in "no man's land" but I could see that I was catching Rob in front of me and putting distance on Kris behind me.  By the time we hit the barriers for the last time Rob was in reach, but I just couldn't make it happen.  I ended up 12th, two spots out of the money and only 5 seconds behind Rob.  It was definitely one of my better races on paper, although it didn't feel that good. 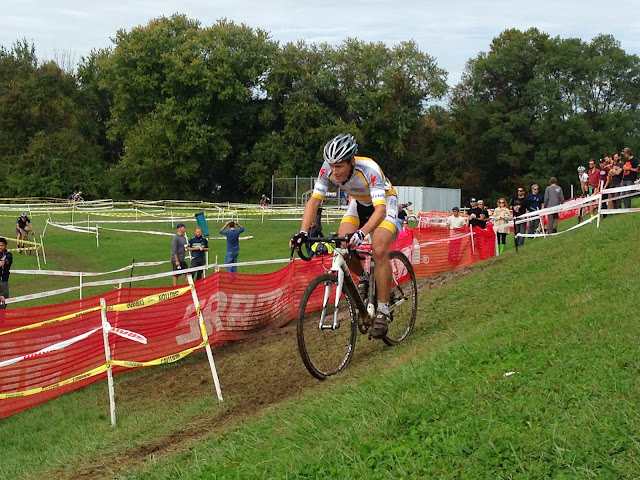 Today was my first day on my new carbon tubular wheelset.  Last week I glued up some Specialized Tracer tires and they turned out to hook up really well in these conditions.  I was pretty low on my pressure today.  The course wasn't necessary "my style" from a power standpoint, although it may have suited me more if it was dry and not that power zapping spongy wet grass.  My corner speed  was good.  I was off the bike three times per lap with the barriers, the barrier/run up and the mud.  That always breaks the race up.  Thanks to the crew at Guy's for putting on a great race!

I've moved up to 16th in the MAC points which I'm happy with considering I've only raced 4 out of 5 races.  I will be out of town for the next two races though, that's not going to help me!

I've been trying to keep my running down.  I did end up with 35 miles of running last week though.  I'm hoping to keep my running base to make the transition to Boston training much easier.  I can tell that cutting out running and doing some riding efforts has increased my power output on the bike.
Posted by Chris